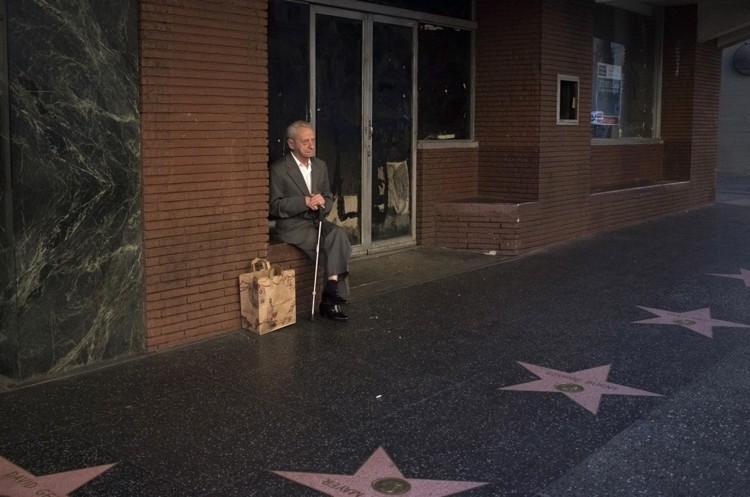 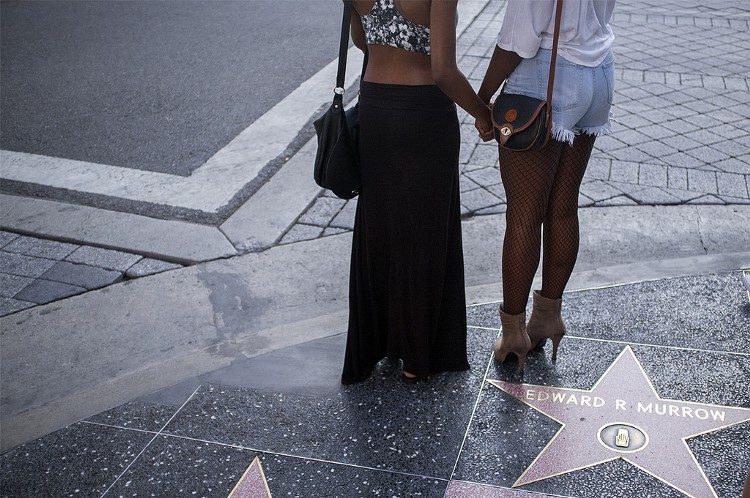 Born and raised in Aurora, Illinois and at the age of 17, my family then moved to Scottsdale, Arizona. College years were spent in Flagstaff. After that I worked and lived in Phoenix for a few years. Lived in Denver for a few summers. That was fun. In 1987 I moved to the Los Angeles area. The South Bay is where I started, then Hollywood, Orange County, back to the city in various neighborhoods; West L.A., Mid-City, Silverlake and Highland Park. Pasadena is my home now.

I took photography classes in college. I was more of a fan of the medium than a participant back then. I came to know the work of Helen Levitt, Mary Ellen Mark, Diane Arbus. All women, interestingly enough, I was obsessed with them. One day I saw a William Eggleston exhibition. That show really resonated with me especially the message plastered on the wall of the gallery, “At war with the obvious.” Maybe it was the graphic designer in me that enjoyed the colors and compositions. I’m not really sure, nor does it really matter. But I’m pretty sure that’s when I began walking around with a camera. I do recall telling someone once back then, I’d like to shoot like Helen Levitt with an Eggleston influence. I still really like that idea. 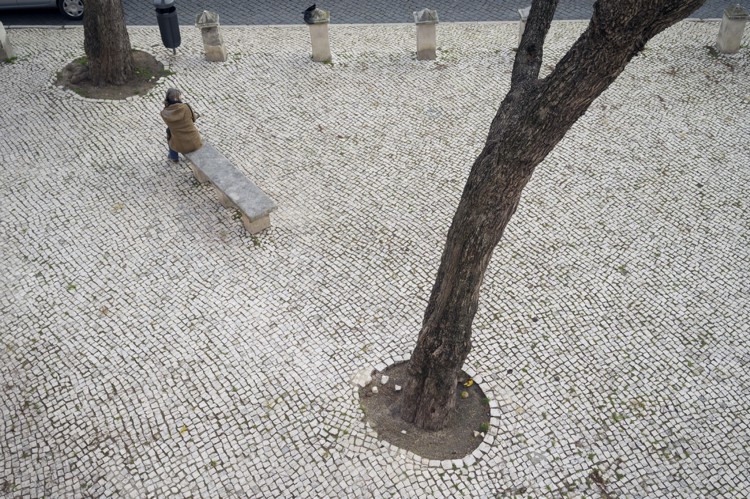 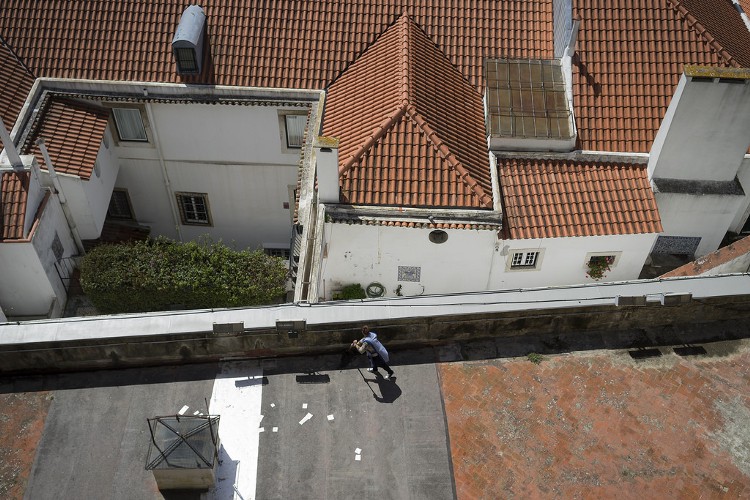 Well, maybe the old story teller in me wants there to be a story in my photograph. The graphic designer in me wants to accomplish interesting color palettes in a photo and pleasing compositions. The struggle is sometimes to leave that academic behavior behind and shoot photographs by simply reacting. React to what I see, feel, hear and maybe even smell. Try to grab a scene as a story. What’s that story from an unusual angle? What’s the story, that I see but other’s might be missing.

I suppose I don’t really have the definition pinpointed for myself. I’m not sure I am a street photographer or at least, I’m still looking for what that is to me.

I’m visual. I live in a very big city. It’s extremely accessible. I like stories. I like people. I like weird/touching/funny moments. Mostly, I find it crazy challenging.

I don’t really come from the camp that “street photography” means it has to have people in it. Evidence that people were there is “street” enough to me. 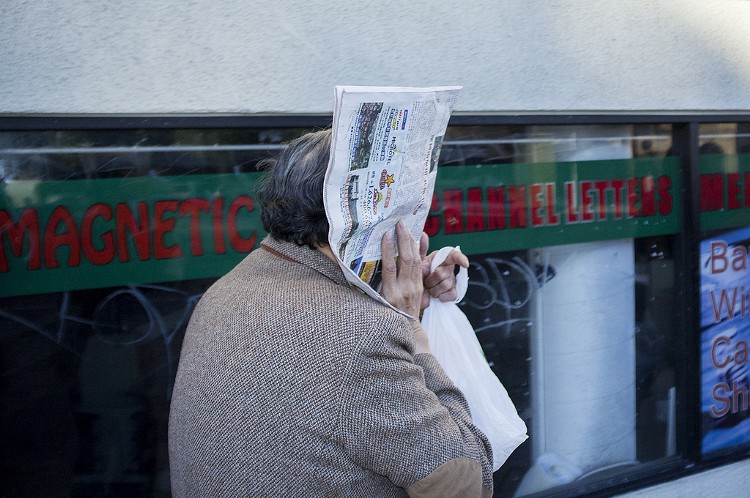 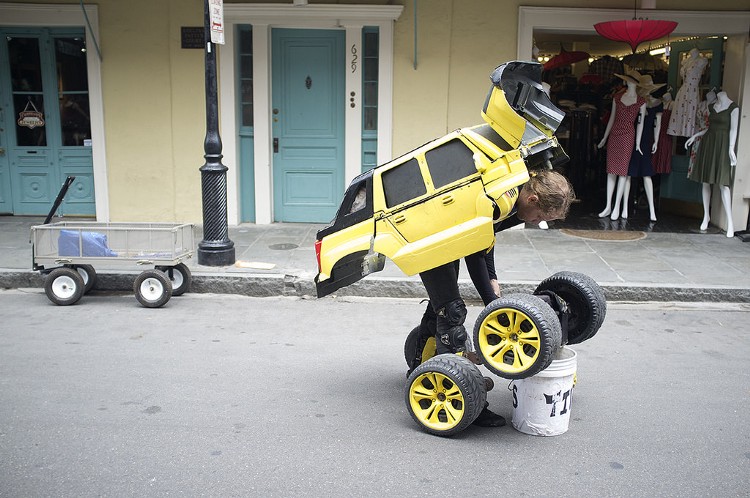 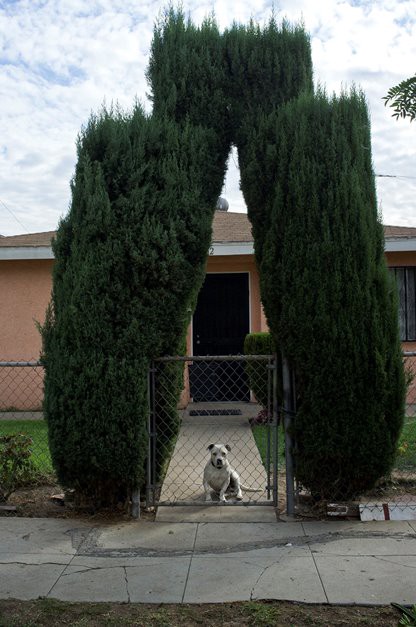 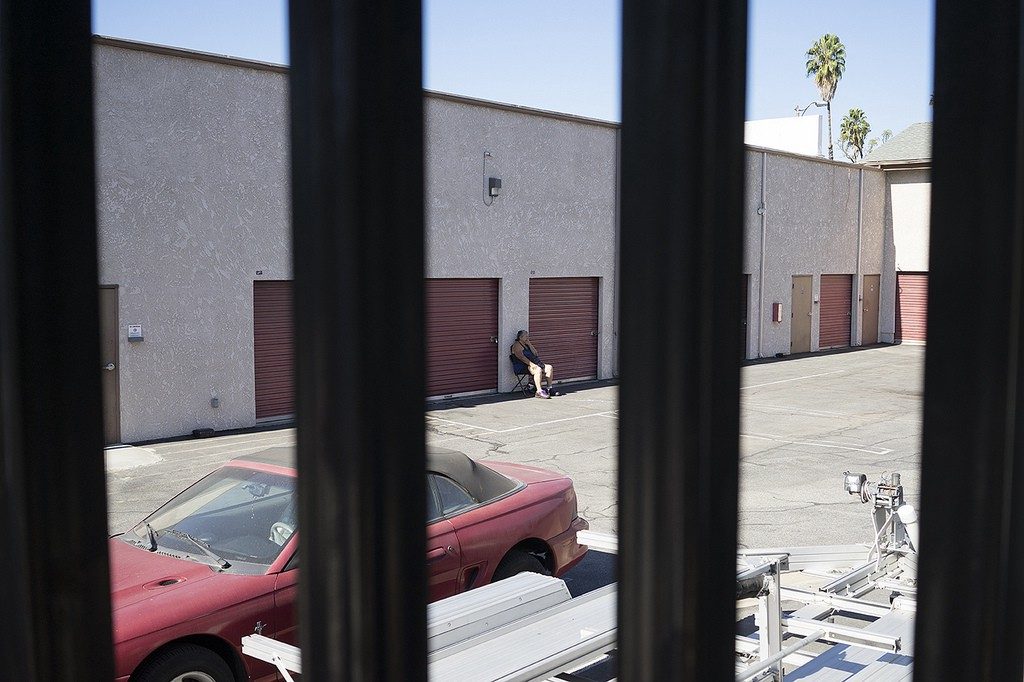 Does your local situation affect how you are able to shoot? Is there a political climate, social attitudes (or laws) about photographing people in public, or another local factor?

Los Angeles is a really easy city to shoot in. It just depends on what you want to shoot.

Everyone is on the street with a camera here. It’s not just packs of street photographers either. The entertainment industry is here, so besides paparazzi (which is probably what keeps the laws about photographing on the street in L.A. legal,) there are tourists and artists out on the street.

If you’re a photographer that likes getting a large flow of people to choose from, New York or London is probably a better bet than Los Angeles. A decent amount of people filled scenes can be found in Hollywood and downtown, but cars rule here. We love our cars.

Well, I’ve never shot as a man, so I’m not really sure how to honestly answer that.

I like talking to people and I’m probably more approachable and trusted because I’m a woman. I have more access to families and kids probably. Now that I’m older, I’m sure no one sees me as being much of a threat. In the street photography world, I would imagine that counts for something.

I find it interesting that I answered a previous question about I how I started with photography, I mentioned three women right off the bat. I admire women. I admire many men too, but I recognize the difference in attention men get more so than women in the arts especially. That’s the bigger conversation, isn’t it? 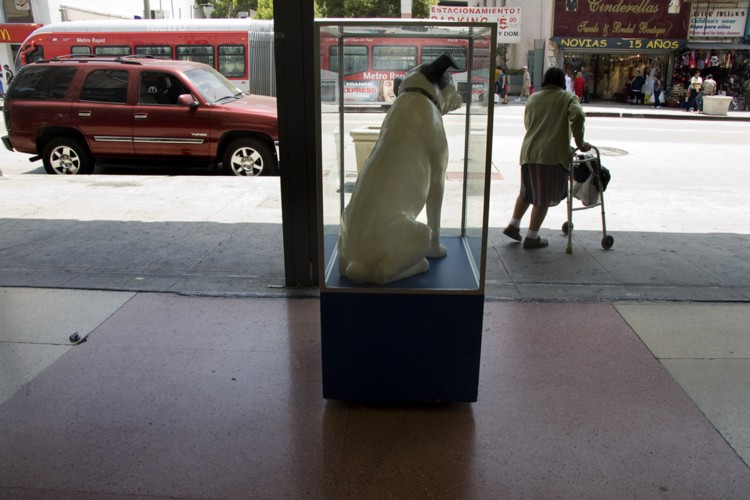 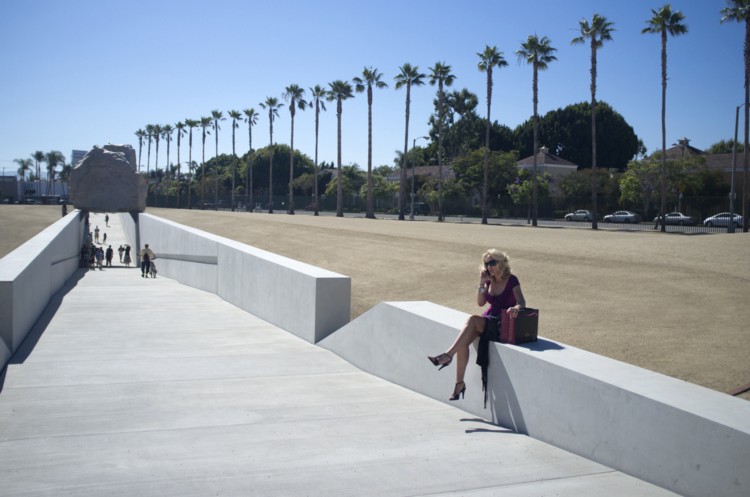 Color color color. You should see my house. Full of color. I love color. Sometimes I wish I wasn’t so drawn to it. It can disrupt an otherwise lovely composition or moment in a photo. But I do love it. That said, I do, once in awhile, examine the world in black and white. It takes a certain trained eye, I think. I love looking at black and white photographs for sure but I enjoy shooting a colorful world.

Digital is 90% of my photographic world. I’m on the computer all the time anyway with work, downloading and editing on the computer is what I do anyway. I love the way a photo looks when it’s printed from film. I really love it. More than a digital print if I have to choose a print. At this point I’m not shooting for the print though. I’m shooting because it’s fun. One day that might change. Who knows?

Equipment and process and technology doesn’t interest me and certainly doesn’t impress me as much as the end results which is image, or the message or that “zing thing” that moves me. 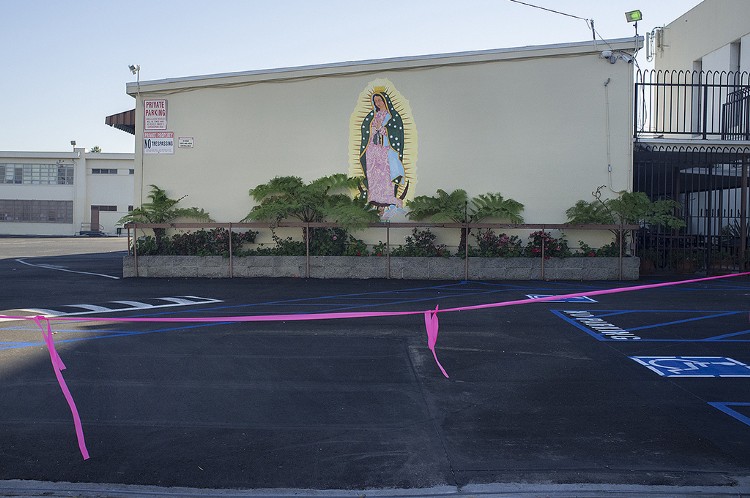 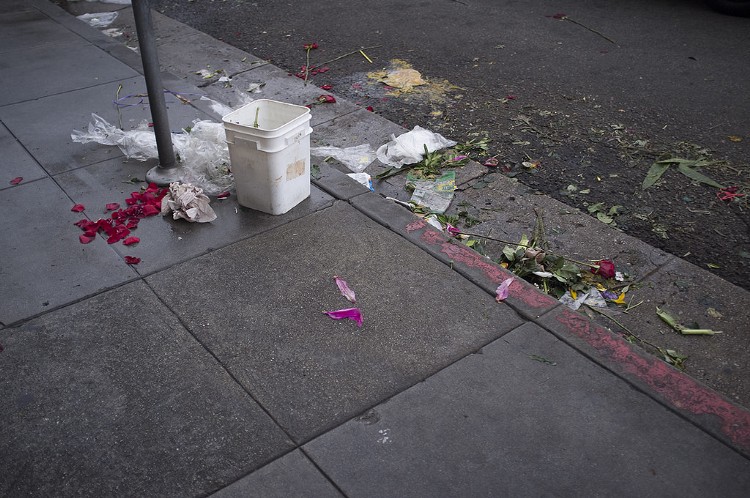 Well, I’ve already mentioned Levitt, Marks, Arbus and Eggleston. “Most inspirational” is interesting to think about. I remember seeing a story about Uganda in the L.A. Times. It was photographed by Francine Orr. It’s the only time I’ve ever written to someone to tell them how much their photographs touched me. Those photos are embedded in my head. Are they inspiring me? Maybe. Then, so are Graciela Iturbide’s and Vivian Maier’s. But I don’t think I shoot like them.

I’m like a child. My attention span is short and frantic. Recently, I’ve been pouring over Saul Leiter’s amazing, beautiful, early color photographs. Prior to that was Zoe Strauss, and her photograph’s raw honesty.

He’s more of a fine artist, but I’m a big fan of David Hockney, whose colors and compositions inspire me. Also the fact that he experiments all the time with new mediums, techniques, and always maintains his childlike wonder — it’s creatively contagious. 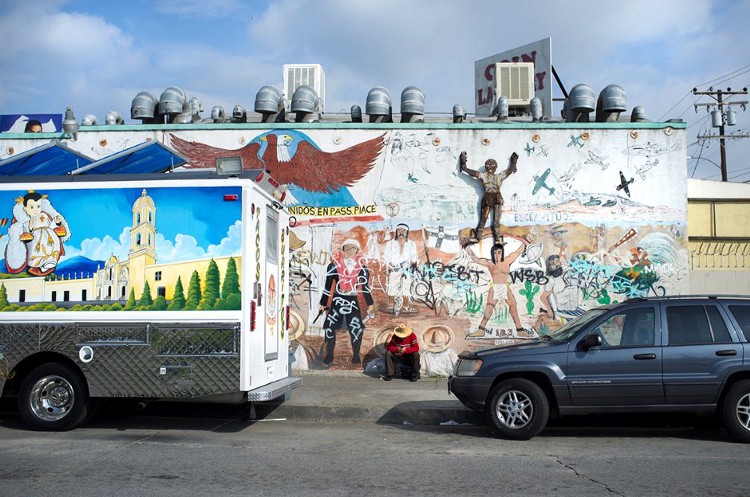 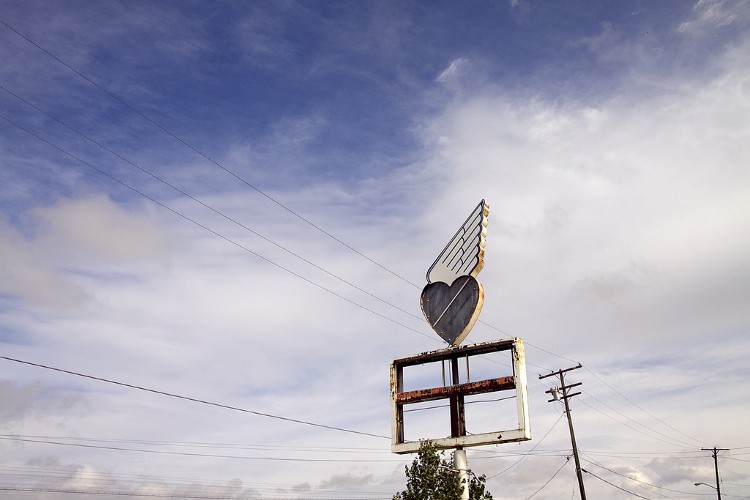 Recurring themes? Since I don’t always shoot “street,” I’d say my recurring theme is photos of rocks. I’m a desert rat. Getting out to the deserted desert is my greatest pleasure. I chill out while gazing at rocks.

On the street level I don’t have a recurring theme that I’m aware of. I center things. I only just noticed that recently.

I shoot medium format portraits nearly every Day of the Dead holiday.

I enjoy being in a collective. Years ago I was in ZuperQuirk. Those were some of my favorite picture taking days.

I’m working on a collaboration with an artist friend of mine whose photographs are not “street” at all. We’re still figuring out the “whats,” “hows,” and “wheres,” but I’m looking forward to being inspired creatively in whatever I shoot next for that. 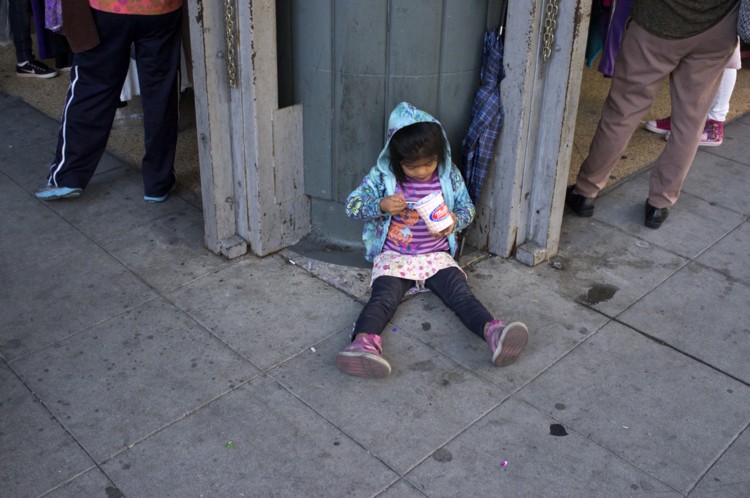 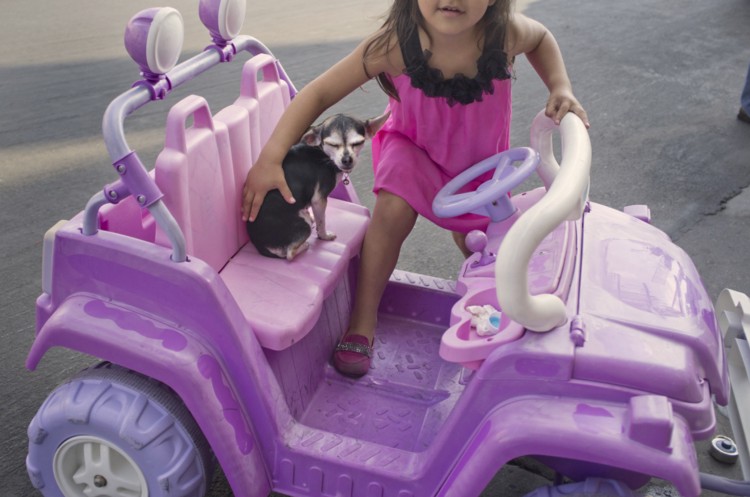 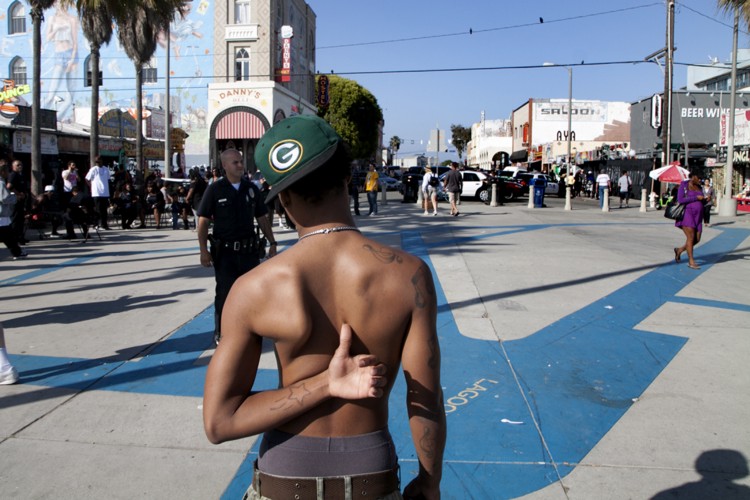 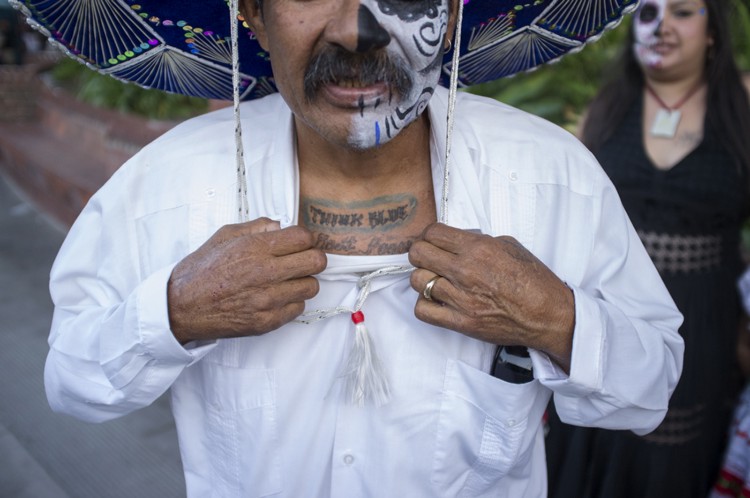